﻿﻿Bruce is a co-founder of One for Health Foundation with his life long friend, Tom Miller. Bruce volunteered to run in this year’s Boston Marathon for OFH to raise funds for its programs supporting healthy lifestyles.
At age 65 and a sprinter at heart, Bruce likens his participation in the Marathon to a “survival test” and jokes that Tom was happy to have Armando join him in the run since Armando is a “real runner and will actually finish the race.”
“Tom can get away with that”, Bruce laughs, “Because I’ll get even with him another time and he knows that. This is how we operate.”

Bruce is passionate about his commitment to change the health of America by providing kids with the tools to create a path to lifelong wellness.

Since becoming an official 501(c)3 non-profit last May, OFH has been making steady progress in the community,
﻿having run programs in several Boston area towns, and now teaming with the Watertown Police Foundation and the Watertown Boys & Girls Club to deliver programs for kids in Watertown.﻿ Bruce would like to see his and Armando's efforts in this year's Boston Marathon help launch larger rounds of funding and expand the reach of OFH's programs.

"I'm happy that Armando has joined us. He has an amazing story and is a great runner. I look forward to greeting him at the finish...if he can wait that long."

Bruce and his family
﻿﻿﻿﻿Bruce’s Background:
Bruce holds a bachelor’s degree in electrical engineering, an MBA, and a PhD in Natural Health. He is a USA Masters Track & Field Atlantic Region two-time gold medalist. At age 55 he was invited (one of 8 in his age group) to run the 100 meter dash at the Penn Relays, a premiere track event. And at age 56 he ran in the USA Masters Track & Field Indoor National Championships in Boston.

Bruce brings forward an unusual and outstanding complement of experience and skills to support his goal of helping others, especially children, attain the highest level of health and joy in their lives.
Bruce has three daughters (Gina, Alexis, and Kelly) and lives in Littleton, MA.﻿﻿﻿﻿ 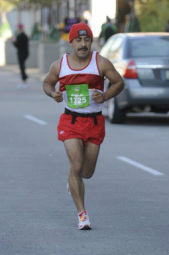 At 48 years old, Armando "Miracle Man" Quinones has qualified for the Boston Marathon, but admits that running through life hasn’t always been easy. After a successful long distance career in high school, Armando settled down and his priorities shifted. “I got married, had children, a job, a mortgage.”

Armando reflected on his 20-year break from running, and decided it was time to make a change. “I could not even jog two miles without stopping. So, I challenged myself to run a marathon within a year.”

He did just that in the fall of 2010, just missing the Boston Marathon qualifying mark by 1 minute and 41 seconds. With another year of training under his belt, Armando was more than qualified to run in the 2012 Boston Marathon. ﻿﻿﻿Shortly after, Armando suffered a heart attack and was in a coma for three days, during which doctors gave him a one percent chance of survival. He did survive, however, and amazingly less than three months later, crossed the finish line of the Rockford Marathon with a time of 3:31:49 - good enough to earn him second place in his age group.﻿ 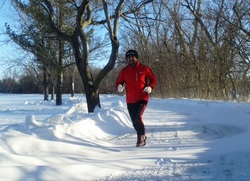 Armando Quinones raring to go
Armando credits his great physical shape with saving his life, and is now running even better than before his heart attack. His perseverance and positive attitude gave him the motivation to train again and he is proud to be running for OFH in this year’s Boston Marathon.

﻿Armando's Background:
Armando was born in CD Juarez Chihuahua, Mexico on November 17, 1965.  In 1980, his family moved to the United States.  He went to West High School in Rockford, IL and ran Cross-Country all of his school years.  He ran his first Marathon in 1983, winning in his age group of 19 and under with the time of 2:47:13.

He moved to Kansas City, MO in the summer of 1984.  Married Renee Lozano and they have four (4) children: Aurora, Chelcie, Stephanie and the only son, AJ.

﻿To learn more about Armando's miraculous and inspiring story about the positives of good health, resilience, commitment and perseverance, click on the file below:﻿